Sale on canvas prints! Use code ABCXYZ at checkout for a special discount!

A Fragile Man Reached Out His Hand To Me

Previous Next View All 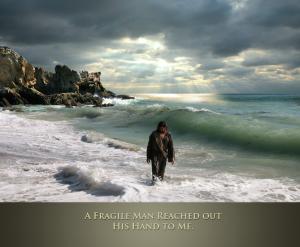 Living near the beach, I glanced outside my window and knew it was the perfect time to capture a good sunset as the summer sun began to pierce through the rain clouds. I quickly got dressed as Jesus, took my camera back pack and tripod then drove to my favorite beach. When I arrived at the beach, it was packed with people as far as the eye could see. It was around 6:00 pm and the sun was still high and I knew it was going to create a spectacular sunset. As I got off my truck with my friend who carried all my gear, I thought they'd laugh at me as I had to walk between masses of people on the sand just to make it to the ocean waves.

As I got close to the noisy crowd, it started to get quiet as I walked among them. Then it happened; I started to hear the whispering words, "Oh my God!" repeatedly through out the beach. People began to turn around to look at me while others got up from the sand to see where I was as people began to point at me and say, "Look! there goes Jesus!" Then the masses became very reverent, humble and polite as many smiled in admiration and support. Three little kids who were building a sand castle suddenly stopped, got up from the sand and pointed their little fingers at me while they joyfully yelled out, "Jesus!, Jesus!, It's Jesus!" Their parents nodded and smiled at me in approval.

I set the camera's configurations then gave it to my friend and directed him on what kind of shots I wanted. I told him to wait until I was fully wet. I made my way into the water and plunged myself into a wave. Nearby was a rock formation that was exposed in the water. I knew if I stood next to it and I held on to it as though I was holding on for life during a storm, it would make for a dramatic picture. As I was trying to find my footing and pose for the shot, I glanced up and saw a thin and fragile man of 75 years of age making his way through the waves as he approached me. He reached out his trembling hand to me in desperation. I immediately held his hand and arm with both of my hands so he wouldn't fall. Then he said, "I know you're not the real Jesus but can you pray for me?" I said, yes of course I'll pray for you. I asked him what was wrong. He said he had cancer. I looked into his eyes as they filled up with tears. There was a short silence between us as I felt very sad for him. I grabbed his hand and arm tightly and I looked up at the heavens and cried out Jesus! Jesus! have mercy! Oh Jesus! I started to pray, then the waves became very violent. We stood our ground as I shouted out for mercy but then I couldn't hear my own voice anymore as though the holy spirit had taken over my words.

At the end, the waves became tranquil and we knew God had heard our prayer. The man thanked me and blessed me as he departed. I could see his wife and sons crying while standing by on the sand. I asked my assistant how long was I out there praying with this man. He told me I was out there for a long time; at least 15 minutes. I was surprise of the time as it seemed shorter but more surprising was that I couldn't remember the words I had prayed as though someone else had taken over. A crowd of people by then had gathered and quietly watched as my assistant took the shots. This is one of the shots right after the fragile man departed.